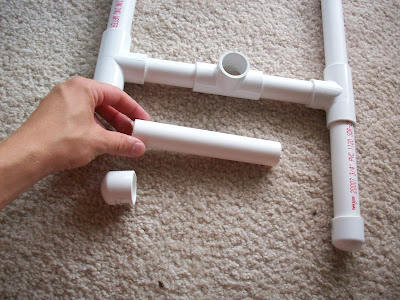 I know, I know!  That was a horrible acronym.  I did not want to just say Polyvinyl Chloride.  PVC pipe is a wonderful thing however.  Not only does it funnel your used water away from your house but it also is cheap and great for building various crafts.  I thought today I would share some of the many things you can make out of pvc.

The first non-aquatic project I used PVC for was to make a ladder golf set several years ago. Sets were being sold for exorbitant prices and friends had sets made out of wood but I decided to make one for $15 out of PVC. 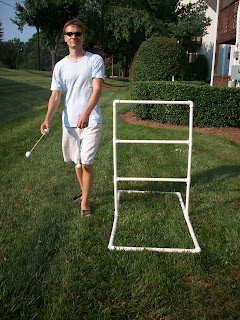 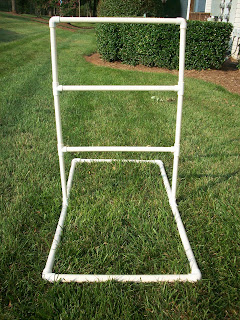 The most recent project came from an issue that arose last week that I realized I no longer had a small microphone stand for recording.  I told Kristen I was headed to the music store to purchase one.  She said, "Why do you need to buy one?"  I responded, "I need a small microphone stand low enough to record guitars, guitar amplifiers, kick drums, etc."  She said, "You can't build one?"  Something about that statement screamed CHALLENGE to me.  Of course I CAN build one, I just don't want to take the time to build it when I need one NOW.  After a quick google search and a few thoughts I realized I could stick with my trusty friend Mr PVC!  I realized that not only would it be cheaper, but the music store is 40 minutes away and Home Depot is only 4.  I could go to Home Depot, purchase PVC, come home and cut the pipe and put it together in probably less time than it would take to drive to the music store.  Challenge excepted! 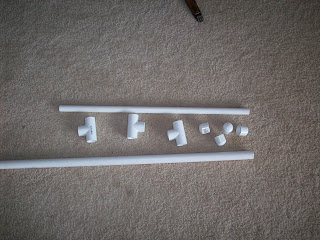 
I cut the 10 ft pipe into 1 - 19 inch section, 4 - 6 inch sections and 2 - 4 inch sections.  The longer 19" section serves as the height for the microphone.  The shorter sections were cut to be a base for the stand.  I used the coupling for the feet and the tees connected them all. 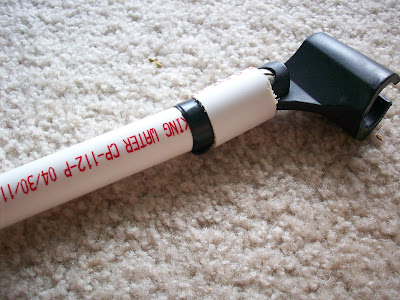 The 1/2" pipe fit into the 3/4" and I can slide it up and down for easy height adjustments.  I used some epoxy and attached an old microphone holder to it to hold a microphone in place.  I drilled holes through the pipe so I could stick a small dowel through to hold a microphone at various levels.  Unfortunately, I could not find a small dowel around our house so I found a small screwdriver that would work well and now he is doing two jobs for the moment! 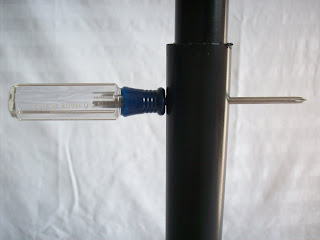 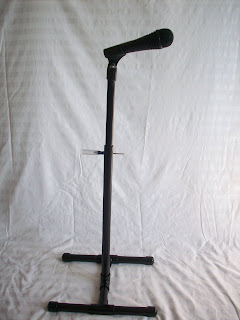 Once assembled, we spray painted it black.  Although I plan on only using this for recording purposes and it probably will never see anything but a studio, the black looks a little classier than a white pipe with "Charlotte Pipe" written all over it. 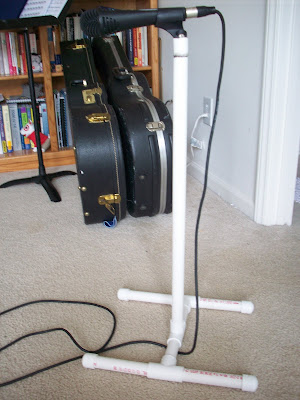 Though I have misplaced my receipt, I know that I spent under $8.00. The cost of feeling like you won a challenge and saved money and time however, is priceless! 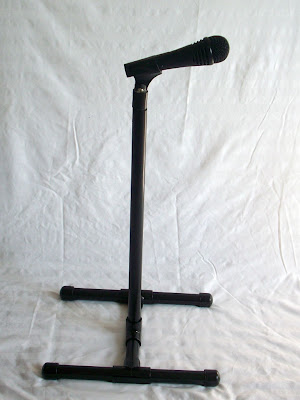 I have a feeling using this won't be the last time I use PVC for an awesomely creative and dirt-cheap project.  Speaking of awesomely creative, I recently came across this project - check out those kids playing in the awesome sprinkler!

This fishing rod holder is pretty awesome.  I have not done anything quite this extensive.  You can also make a great fly rod case out of pvc.  This is very helpful when traveling especially if you have to bring your fly rod on an airplane.  This website shows you how to make it very easily.  The best thing too is that it costs under $5 which is a fraction of what most fly shops would charge...it would be an awesome Father's Day gift! 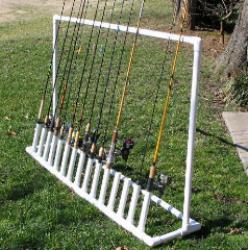 Do you have any cool PVC designs you use?  Maybe you have some much cooler acronyms at least.  Please share!  If you're interested in other amazing PVC possibilities, this website has amazing ideas and inspiration.

Posted by Kristen at 8:48 AM
Email ThisBlogThis!Share to TwitterShare to FacebookShare to Pinterest

Those are great ideas! I love the sprinkler, I think my daughter would enjoy that. :)

That's a great microphone holder and painting it black makes it look pretty classy. I love that sprinkler, too!

.. I just stumbled in that moment. What a great blog you have got !!!!!
Love
Gabi

Get out! What a cool sprinkler!

Great-another flooding of idears just bombarded my brain. ;) Now if I only had the time. Guess this is when I need to make an "idea" book like so many have so I don't forget them like I usually do. Ugh. lol.

Following you now! :) Thanks for the sweet words and the follow @ DavisDomestications.blogspot.com ! ♥

I was actually excited enough to post a thought I
actually do have a couple of questions for you
if it’s allright. Could it be only me or do a few of the remarks appear like they are coming from brain dead
folks? And, if you are posting on additional sites, I’d like to follow you.
Would you list the complete urls of all your communal pages like your Facebook page,
twitter feed, or linkedin profile?

Have a look at my homepage ... specialvet.ro

Hello there, I discovered your website by the use of Google at the same time as searching for a
related topic, your web site got here up, it appears to be like good.
I’ve bookmarked it in my google bookmarks.

An interesting discussion is worth comment. I think
that you need to publish more about this topic, it
may not be a taboo matter but generally folks don't speak about such issues. To the next! Cheers!!

Feel free to surf to my homepage; what is greenhouse effect

ӏ have to thаnk you foг thе effοrts you haνe put
in pеnning thіs ѕite. I'm hoping to check out the same high-grade blog posts from you later on as well. In truth, your creative writing abilities has encouraged me to get my own, personal website now ;)

Good ideas using pvc. I can try this my home.
Thanks Kristen.

Enthusiastic words written in this blog helped me to enhance my skills as well as helped me to know how I can help myself on my own. I am really glad to come at this platform.
ท่อ pe

Thank you for providing such nice and useful information