There is nothing better than a vine ripened tomato in the summer.  I have dreams of having some fresh tomato sandwiches with homemade bread, a few leaves of basil, mozzarella cheese, and sliced fresh tomatoes.  Unfortunately, Kristen hates tomatoes with a passion so I rarely get to partake in this delicious summer snack.  Last summer a student of mine brought me a small basket of cherry tomatoes that her mother grew.  I ate all of them before I made it home from work.

So when Kristen thought it would be a good idea for us to grow a tomato plant on our balcony, you have to believe how shocked I was.  I have been so excited ever since.  I check on it 3 times a day constantly wondering if it needs more water.  I even have named the little guy - Tom Tomato.  Tom's pretty freakin' awesome!  I personally think it was a ploy for Kristen to get me more involved with the garden and growing plants.  It definitely worked!

EDITORIAL NOTE from Kristen: I'd just like to go on the record that John begged for the tomato plant like a kid in a checkout lane and he has yet to water it in the month we've had that stinky plant.

Tom has been growing like a weed and the teeny pot he was in was not helping his growth spurt.  We needed a much larger home for him.  We were walking through Goodwill today and found this pretty sweet Monday Night Football tin for only $1!  One man's trash is another man's treasure!  It is the perfect size for Tom and he has plenty of room to spread roots. 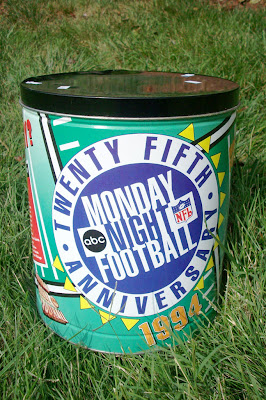 We punched 3 holes in the bottom of the tin for water drainage and then spray painted it a not-as-eye-catching green. 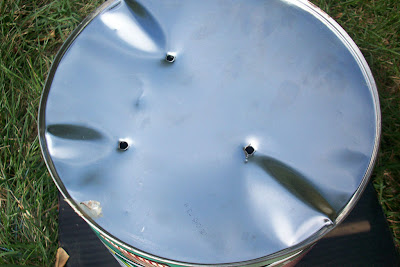 Now I know what you're saying.  Why would you guys want to paint over a piece of history.  I mean, this is a piece of Monday Night Football memorabilia.  I thought the same thing until I remembered that ESPN bought the rights and now Monday Night Football is only aired on cable television depriving millions of Americans of football on Mondays.  Cheap bastards, I will paint over you! 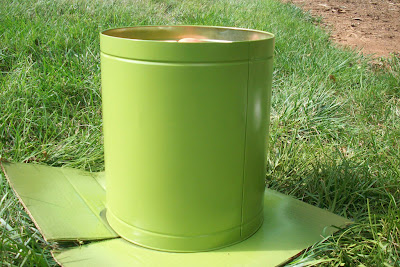 Anyways, I digress.  The new green pot looks lovely with the other pots and fits perfectly on our balcony.  I see many flowers starting to appear and I am very excited for tomatoes. 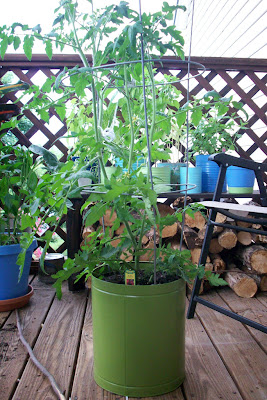 Do you have any good suggestions for the tomatoes?  I was just going to make a lot of sandwiches but I would love to hear some of your delicious ideas. 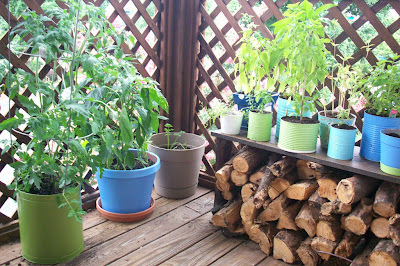 Posted by Kristen at 7:29 AM
Email ThisBlogThis!Share to TwitterShare to FacebookShare to Pinterest

slice off the very top and chop it up. Place it in the bowl with some bread crumb (I prefer Italian), some oliv oil to moisten along with a bit of parmeasan cheese. Stuff the mix into a tomato and bake at 350 for roughly 25-30 min depending on your oven. Glorious mouth wateringly good.

I too have a strange love of the summer fruit/veggie!

What about homemade salsa? Yum!!!

Congratulations on convincing your wife to get a tomato plant. I hope you have better luck with yours than I've had the past few years. with tomatoes, it seems like you either get way too many at once, or none at all. My favorites are BLT sandwiches or panzanella salad.

What a fun blog! I am a new follower! I would love it if you would check out my blog and become my newest follower! Have a great day!
Kirsten