Two Christmas seasons ago, I casually mentioned how fun it would be to cook something in our fireplace. You see, John and I love camping and cooking over a campfire, but in the dead of winter, I was not about to venture off my warm couch to have some adventure and fun.  That simple comment of mine sparked an intense flame of desire in John and he made it his mission to cook a chicken in our fireplace. He researched, he shared his plans with everyone he met, he planned the big day to be Christmas.  Don't worry, I hid a frozen pizza in the freezer just in case. When the big day arrived, we didn't need that pizza because that chicken was the most delicious, amazing chicken we have ever had. It was super moist, amazingly fragrant, and oh so scrumptious.  After that Christmas dinner, I seriously dreamed of that chicken for months, but John had deemed the amazing Fireplace Chicken so awesome, it would only be cooked on Christmas Days. Sigh.  Lucky for you, though, because you can eat your Fireplace Chicken (and yes, it must be capitalized out of honor and respect) whenever you want. So, maybe you could cook some tonight and mail me a leg or a breast or even just a wing.


John preps the chicken by seasoning it well above and under the skin with olive oil, rosemary, thyme, salt, and pepper (he says under the skin is the most important step).  He also slices some fruit like apples and oranges and perhaps an onion and places them in the cavity of the bird. When he gets fancy, he juices the oranges and pours it under the skin.  Then he takes small pats of butter and places them under the skin near each breast, the legs, and wherever else you'd like. This keeps the bird moist and gets the herbs moving around.  He likes to skimp on the butter, but I say the more butter, the happier the chicken and I both are. 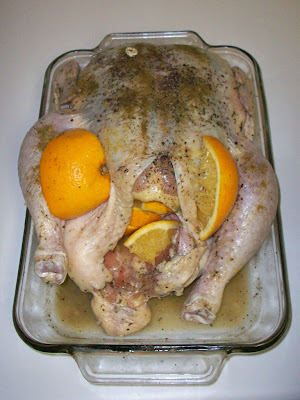 Look at that fabulous looking bird!  We usually let him sit and marinate for an hour or so while we work to get the fire ready.  The fire must be HOT before you introduce it to the chicken.  In order to develop a deep core of glowing embers at the base of your fire, ensure it's burned at least an hour with several big logs. These embers supply all the heat and without them your chicken will complain he's cold and naked.  As your wood burns and the pieces fall into the bottom and burn as embers, consistently add fresh wood on top to keep a big blaze going. It should be uncomfortably hot about a foot in front of the fire. 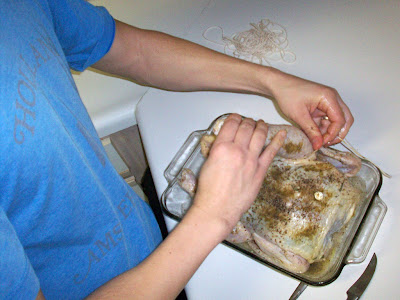 The next step is to string that bird up. Take some kitchen twine or string, soak it water for several minutes, and then tie him up.  Sew the cavity shut and wrap it around the bird to create a harness. 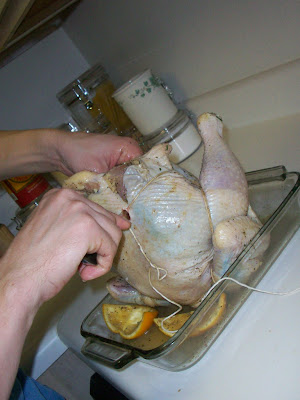 To tie up the bird, start by piercing the back, just to the side of the backbone near the tail and pull through a long length of twine. Twist the string around the heal of the drumstick tightly several times and then bring it up to the wing and secure with several twists as well. Bring the string around the front (between the front of the breasts and the base of the neck) and to the other wing. After wrapping the wing several times, proceed to the last drumstick and wrap this several times as well. Pierce the back again, just opposite the initial spot,   so that the twine comes out the back near the tail next to the twine coming in. Pull both ends tightly so that the drumsticks are pulled up to the body tightly and tie several times to secure. Cut the shorter end close to the knot and leave a long length to hang the chicken from while cooking. 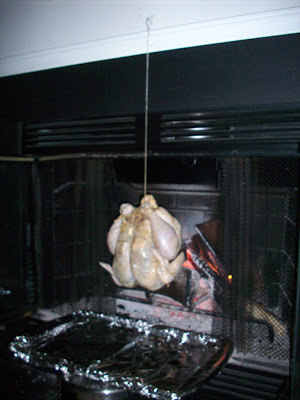 John put a small hook above our fireplace that holds the stringed-chicken. Notice that we have a pan a few inches under the chicken to catch drippings.  For the next 2-3 hours (depending on the size of your bird) your job is to sip wine, play board games in front of the fire, and ensure the chicken is rotating.  We also wet our sting with water periodically to ensure it doesn't dry out and snap (last Christmas it did and oh the frenzy in our house as we reacted to the crash...). 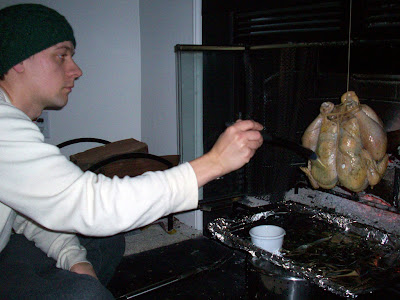 While relaxing and enjoying the fire and family time, you can occasionally baste the chicken with a mixture of olive oil, salt, pepper, and herbs.


Our games of choice during this sacred time are Bananagrams and Rummikub.  You'll also notice the wine glass which is a definite must.  Cooking Fireplace Chicken without some chef juice is just wrong. 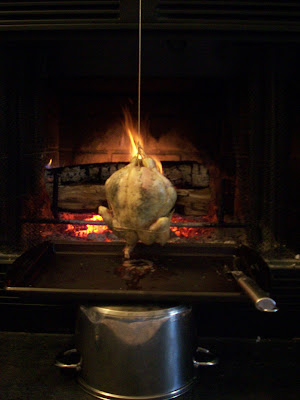 It's a lovely sight, isn't it?  You may need to raise or lower the chicken by wrapping the string more or less on the hook if the bird is getting cooked in just one area. 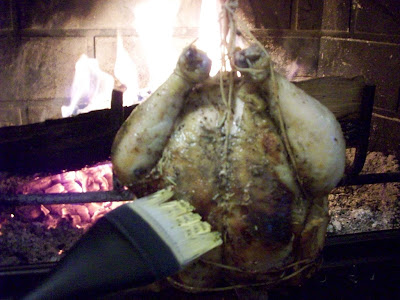 Here's an action shot of the basting. 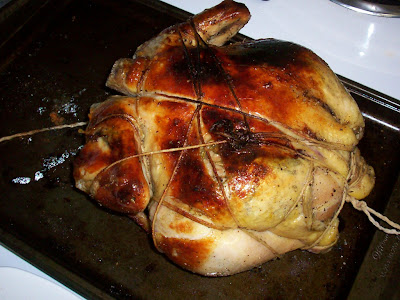 The chicken is done when the core temperature reaches 165 degrees. When checking, be sure you don't touch the bone with the thermometer. You can also put it in the oven on a low temperature for 15 minutes to ease your mind if you'd like. Can we get back to that picture - look how golden and beautiful it is! Cover with aluminum foil and let rest for 15 minutes. 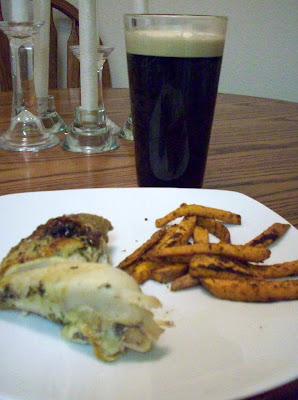 During this meal we served him with some sweet potato fries and beer.  Enjoy!

Rub chicken on outside and between skin and meat with olive oil, rosemary, thyme, salt, and pepper.  Place pats of butter under skin near breasts and legs.  Stuff cavity with fruits and vegetables.  Let marinate for an hour while stoking the fire.  String bird with twine to create harness and tie to hook above fireplace.  Cook for 1.5-3 hours, depending on size of chicken. Ensure that chicken is slowly turning throughout cooking process.  Every 20 minutes or so wet string with water and baste chicken with olive oil and herb mixture.  Chicken is done when core temperature reads 165 degrees. Let sit for 15 minutes to allow juices to soak in. Carve and serve.


Linking up to:
Keeping it Simple
The DIY Show Off
Craft-O-Maniac
Tip Junkie

Posted by Kristen at 9:41 AM
Email ThisBlogThis!Share to TwitterShare to FacebookShare to Pinterest

It does look yummy. Your aunt usually spends Christmas praying for God to spare your lives (mostly from salmonella) because she knows you're cooking a Fireplace Chicken. Hopefully this post will ease her mind and she'll see that you aren't actually eating it half raw. Maybe next year you can come and cook a chicken in my fireplace.

That's awesome! Looks & sounds yummy. My hubby would freak about chicken drippings in the fireplace... so I'll just have to live vicariously. :)

WOW that looks fantastic. I love camp cooking too. I plan on getting a dutch oven soon... but I've never done chicken like this before. I don't have a fireplace... but I just might have to give this a try over the coals of my next campfire. Thanks for sharing.

Iâ€™ve been into blogging for quite some time and this is definitely a great post.Cheers!

A chicken roasted in your fireplace?! I have heard it all. Does sound like a nice "smoked" alternative to barbque in the cooler month. The only side to this, my husband would HAVE to assist. I do not mix well with flames! HA