Do you mind if I share a horrific painting story with you today? You may need to put your children in another room so they won't have nightmares tonight. Let's call this story, "What's Lies Beneath the Lid".

Last weekend John picked up some much needed primer for several of our projects.  Being overcome by the diy add virus (read about the symptoms here) I snatched up the quart of primer faster than Layla snatches up dropped food and started attacking some of our billion projects we have going on.  Sure, in the midst of my crazed painting one part of my brain noticed the super duper strong smell and another part recognized how the paint was weirdly separated.  I was in primer heaven, though, and couldn't be bothered with thoughts of anything other than majestic makeovers and creative crafts. 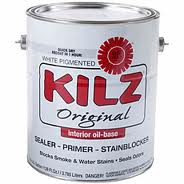 In order for you to fully grasp the horror of this story, you must know that when I paint, I get more than just messy - I get baby-eating-spaghetti kind of messy.  My hands are coated, I wipe drips with my clothes, and inevitably paint finds it's way on my feet every single time.  Needless to say, I was a hot mess after my priming party.  Like always, I took the brushes and myself to our sink to start washing up.  It's then that my brain started recalling my previous observations as I watched the water beading up and the paint smearing everywhere.  Every.Where.  Oh, and my brain also reminded me that I had forgotten to take off my wedding rings. Enter shrieks for John.

In between accusing John of conspiring against me by introducing oil-based primer into my water-loving life, I was begging him to yank the rings off my finger before anymore paint coated them.  Let me take a brief break here to ask if anyone has ever had their husband attempt to remove their rings from their hands. It's hilarious in a normal situation, maddening in this situation. So, in the midst of taking off my rings, John became covered in paint and the rings looked like white porcelain instead of my beautiful jewelry.  I instructed John to immediately head to another sink and start washing the rings while I sought to remove as much paint as possible from myself.  If this were a horror film, the camera would be panning back and forth between me and John while focusing on our fear-stricken faces.

After several minutes I realized that the paint was not going anywhere...well actually, it was smearing everywhere but not disappearing.  I headed into the bathroom to check on John and he was struggling as much as I was.  I decided to pull out some sugar and olive oil - if I couldn't remove the paint, perhaps I could scrub off my painted skin.  Eventually I was able to remove enough paint from my finger tips that I could take over ring duty. 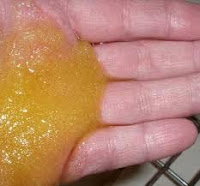 Taking over ring duty was essential because John was freaking out as he realized he couldn't practice with paint-covered hands.  He's in grad school for classical guitar and is busy preparing for a huge recital in a few weeks.  My shrieks for help interrupted his precious practicing.  The more he tried to get the paint off his hands, the more is just smeared around.  Our kitchen and bathroom both looked like they were in the midst of demolition with water, paint, and paper towels spewed everywhere.

In order to protect you from further horrifying details, we will fast-forward 30 minutes.  Eventually the sugar and oil mixture succeeded in removing our skin and the paint enough that we could calm down.

The point of this long story is to share my newly developed fear of our primer. It has sat on our balcony all week because I refuse to go near it and our paint brushes haven't been cleaned.  Today I have a list of things that must be primed before I can finish the projects and I can't bring myself to open the primer. I'm scared of the horror that lies beneath the lid.

Posted by Kristen at 2:39 PM
Email ThisBlogThis!Share to TwitterShare to FacebookShare to Pinterest

Horrors! Oil is evil. Just ask my friend Anne who wanted to paint the trim in her spare room. Someone said they had some white paint leftover in a label-less can and, being the thrifty person that she is, she gratefully accepted it. Within an hour the paint had been spilled, her towels and washing machine had been ruined, and the carpet had been ripped out. Surprise! It was oil based paint.
I'll bet your hands are nice and soft after all that exfoliation!

Been there...not good. I NEEDED the oil based for pmy doors I was sanding then repainting...oh, and for the fireplace I painted. Now it lingers around begging to be used again - I think not!

I'm totally a messy painter too. I should post a pic of my paint clothes. They are so nasty. My husband paints in whatever he's wearing...I would have no clothes left if I went that route.

Glad to hear everything turned out okay!

What an ordeal! I have to tell you.....this is my very favorite primer ever. It's a great primer especially if you are painting over a shinny surface and don't want to sand, but it just takes a little special care. I too am a very messy painter and this story sounds a little too familiar to me. Goo Gone will clean this stuff right up, just keep some on hand. I will say that if you don't have a special reason to use oil-base, then don't use it. Good luck with the whole clean up and have a great week!
Carrie fineandhandy.blogspot.com

DO NOT GET IT IN YOUR HAIR!! It took almost a month to wash out of mine when I primed the new ceiling in our kitchen. TRUE story. Best of luck to you.

I can tell you I worked with that stuff once or twice,and it is a nightmare indeed. I have found wearing rubber gloves is the ticket! Thanks for sharing your story LOL! with my newbie party. Please add my link or button to your post. Thanks.

I freaking haate oil-based primer. I did not take it seriously that they say to throw everything away you use oil-based primer with until I had a similar experience. Yuck. You'll never do that again!

Haha, this made me laugh. There's a few tricks with oil based primer...

Gojo for your hands is amazing. I always paint with my rings on and I'm the messiest painter in the entire world (as evidence seen in this post : http://mekhart.blogspot.com/2010/04/painted-floors.html), and this stuff has yet to fail me. It's like a pummice, but it works quick and smells great. You can get it at either of the big box stores.

To clean up your paint brush, use mineral spirits. It's the only thing that I know of that cleans oil based paints and stains out of paint brushes and off of surfaces really quickly. It's stinky too, but it works like a charm!

Hope that helps...happy painting!! :-D Thanks for the laugh!

I'm a messy painter too. I just stumbeled by your blog today :)

The best advice for removing oil - paint is oil. I use olive oil or sunflower oil. Massage onto skin, and rinse off with water - then wash with regular soap.

That's a hilarious story...I just recently had my first experience with oil based primer. I'm in the middle of making my own bar counter. I was told by my local paint shop to use oil based primer on the new wood, then latex paint, and then some kind of clear sealer on top of that all...some kind of gym floor grade stuff.

I finished the first coat of oil based primer and brought the paint brush upstairs and put it in the sink...and the water just beaded off of my hands and the paint was just spreading to everything I touched...

I dried my hands off with paper towel enough to get on my phone and search how to get it off my hands...what really worked well is the oil spray you use when baking and then use soap after. The oil breaks it up somehow and then use dish soap to get the oil all washed off.

For the brush...I just used gas in the garage. I made the mistake of bringing the brush inside after and stinking up the whole house but hey...it was clean and my hands look like there was never any freaking out lol