The Intimidation of a Gallery Wall

Everywhere I look there are fabulous gallery walls. Magazines, online, television...and the galleries of pictures always make my jaw drop. The impact of a wall filled to the brim with pictures is spectacular.

Watching television and movies I always see perfectly put together walls of photos up a stairwell or across a living room wall. They look sophisticated, elegant, and professionally done. I wanted one. In a bad way. In graduate school I went so far as buying a set of "gallery frames" that came with 12 matching frames in which I hung photos of flowers I had taken. The impact was, shall we say, significantly lacking. It was dull, boring, and not what other gallery walls looked like. When I moved, I hid all the frames under beds and couches and refused to hang them.


All those pictures and frames hiding in every crevice our teeny apartment had drove my husband crazy. He was forever begging me to hang the billion frames I owned or throw them away.  My desire for the perfectly planned and hung wall of photos paralyzed me and the frames stayed tucked away until we moved to North Carolina. After packing boxes of pictures and frames - and then unpacking them - I was ready to try again.

I spent time looking at images of the "perfect" gallery wall and trying to determine what had gone so horribly wrong in my first attempt. What I discovered was that the walls I loved were ones with mismatched frames - color, size, shape. I was drawn to the walls that had texture and interest, that showed character and randomness.  I gathered the billion frames I owned into our office and decided then and there I would proudly display each and every photo and frame I owned, no matter how much it didn't match.

In the end, it wasn't too difficult to plan where to hang each picture. I gave myself the easy job of laying each picture on the ground and rearranging until I found an arrangement that worked. I started with the biggest frame and decided to work around that. Once everything was laid out, I cut out templates that fit each piece to be hung and wrote a description of the photo it represented. I then taped them to the wall to ensure I liked how the arrangement looked on the wall as much as I did on the floor.

That's when I called John in to do the hard work. It was his job to hang each picture to my very exact specifications. Just kidding - the great thing that I realized in making this random, eclectic gallery was that imperfections would just make it more eclectic.  John began by hanging the central piece and worked outward and upward. 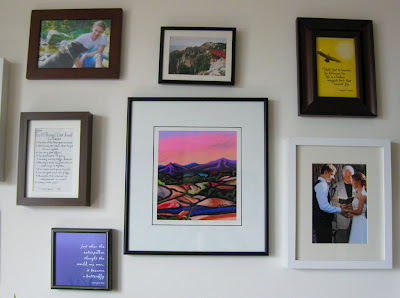 We've slowly been adding to it and the randomness of the arrangement allows for us to simply place a frame wherever we desire. I currently have a picture that is in need of a slightly larger frame than the majority of those hung and plan to hang it on the small side wall in place of some of the smaller frames. I'll relocate the smaller frames by moving them to the center of the wall and above the rest. 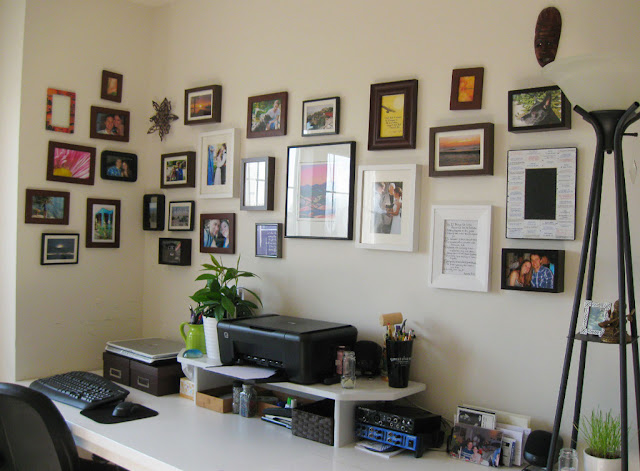 We also have a smaller, more uniform gallery in our bedroom that is a bit more precise. 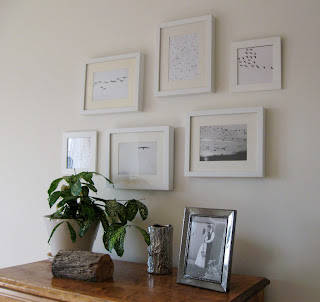 This one took more measurements and discussion on how far apart the pictures should be from one another. Once that was decided, John measured where the frame hung, marked it on the paper template that was taped to the wall, and nailed directly through the paper to ensure we hung the pictures perfectly. With the small scale, the exactness of this project wasn't too intimidating....plus we had practice.

So, if you're like me and am overwhelmed and intimated by the awesomeness that is the gallery wall, I say go for it. Remember, it doesn't need to be perfect and you can always add or subtract should you want to change your arrangement. A few holes in the wall are nothing compared to the satisfaction of staring at a vast display of pictures.

Posted by Kristen at 10:55 AM
Email ThisBlogThis!Share to TwitterShare to FacebookShare to Pinterest

Very nice. They're so different but I love them both.

I've seen these all over blogland and decorating magazines too, but have yet to take the plunge and do one. I love how both of yours turned out. Well done!

Thanks for visiting Newlyweds on a Budget today. As much as you love my bright yellow vase I love your gallery wall!! Im in the process of gathering frames for mine right now.

I, too, LOVE gallery walls!